What We Can Learn From Famous Thank You Notes

We all know a thank you note is an important tradition to share our gratitude and strengthen relationships. No matter how many we write, it can sometimes be hard to know where to start or how to hit every important point. When you get stuck, it can be helpful to remember that everybody gets writer's block at times — even the celebrities among us — famous for their elegance and poise.

Recently, there was an article on The Huffington Post about some of the most famous thank you notes, and the team here at Thnks found these examples of gratitude inspiring. Each of them gives us a pointer or two on how to say 'thanks', and the stories behind them make them even more interesting.

The timeliness of a thank you note can sometimes mean highlighting work anniversaries or the anniversaries of major milestones. In situations with the gravity of another person’s survival, humor is almost always welcome. In this note, Neil Armstrong thanks the Extravehicular Mobility Unit for their work on the 25th anniversary of the lunar landing. With the stakes that high and the success they achieved, we’d like to think Neil made sure this team knew how important they were with many 'thank yous' over his lifetime.

Incorporating Gratitude in Your Apology

We all make mistakes. Some are small, and some might involve starting a fight with most of the visitors at the Troubadour club in Los Angeles… In this note, John Lennon apologizes to the actress Pam Grier for his rudeness and thanks her for not hitting him. The best way to make sure your apology sounds sincere is to add a thank you for gracious reactions from the other party, even if it’s simply one line.

Choosing Your Words Wisely (And Keeping It Concise)

Marilyn Monroe to a German General

Sometimes less is more! A thank you note doesn’t always have to be an essay of every wonderful attribute the recipient has. In certain situations, short, sweet, and timely are the best strategies to let someone know you appreciate something they’ve done. Take inspiration from this thank you from Marilyn Monroe, which is only three short sentences long and gets directly to the point.

We tend to start our list of 'thank yous' with the big things — our health, home, families. As we dig deeper, we find that some of the things that make our lives infinitely richer are seemingly small, ordinary details. Recognizing the little things and sharing our appreciation for them is a great way to increase the happiness of our own lives and share that with others. In this note, Barack Obama writes to Yann Martel, author of Life of Pi. He had just finished reading the book with one of his daughters and was struck by the way the inclusion of animals made the story more powerful. 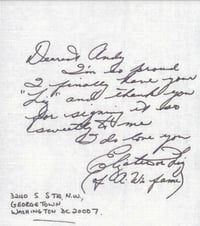 Andy Warhol waited nearly 14 years before sending Elizabeth Taylor a version of one of his most famous series — of which she was his muse and subject. Rather than hold a grudge or wondering what took so long, she responded promptly with a letter of gratitude. Even when something feels like a given or that it should have been done a long time ago, it’s important to meet any kind gesture with the same level of gratitude. 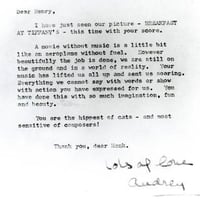 It can be easy to feel like our work is a product of our own efforts alone, or that our contributions carry the success of our organization. This note from Audrey Hepburn after seeing one of the final cuts of Breakfast at Tiffany’s thanks the film’s composer Henry Mancini by saying “Everything we cannot say with words or show with action you have expressed for us.” When we take a step back, we can see that every member of our team contributes something important, even if we don’t see it at the moment.

Thanking Those Who Made an Opportunity Possible

At the end of a project, thanking the people who helped you complete it shows both humility and gratitude. Ronald Reagan wrote this open letter to the American people after being diagnosed with Alzheimer’s disease. He and wife Nancy felt that his diagnosis would create a greater awareness. In sharing such sensitive information while facing the disease that would eventually end his life, he thanks Americans for allowing him to be president.